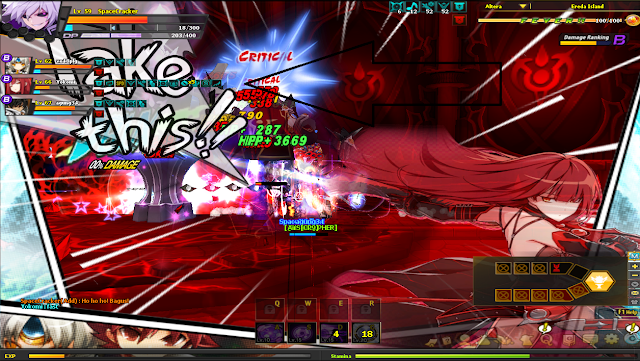 The longest one I have ever seen.
Diposting oleh Unknown di 11.10 Tidak ada komentar: I followed level 80 cap for this build.

Mind Break (SKIP)
It was nerfed after last revamp, so I can't guarantee it still worth taking or not. Skip it is better, i think.

Particle Accelerator (PvE - Master)
Don't know what to do for the left skill slot (PvE), I end up take this skill.

EMP Shock (PvP - Max)
Connect to Overlimit Combo (Nasod Armor Combo) after it. The reason is just for catch, with extra MP burn.

Dynamo Configuration - Space Crack (PvP - left SPs)
I dumb the left SPs here. When I confused what skill I should take to replace Mind Break which I skipped, I end up take this. It is looked little interesting for me.

Seal of Time (Both - Master)
This is must-have skill for all DE.

Maximum Strike (PvP - Max)
Yeah.. It has good damage, but the MP/DP usage for the skill is another matter. It still worth taking, though.

Stardust Shower (PvE - Max)
The gate size is bad, but it is still good for bossing.

Reverse Circle (Both - Max)
It's good skill in all condition, except wall, ledge, and platform. But it damage and cooldown are just too awesome. A lot better than Stigma.

Force Nova (PvE - Max)
It can hit more than one target, so it's better for PvE.

Force Finger (PvP - Max)
It's only hit 1 target, but it is followed with MP burn also. That's good for PVP.

Moonlight Rhapsody (Both - Max)
Rhapsody debuff from this skill has good damage. So evil in team match and PvE. Good skill.

Mind Circle (Both - Max)
Since I leave Mind Break, I don't have any interest to take ESP. Only recover little MP, yup that's true. But this passive is always active.

Other passives that must be leveled max (Both):
Nasod Armor Mode - Overlimit, Library of Limitless, Mind Control, and Time Control.


Note: Don't follow this build exactly if you don't sure that it will suit to you or not.
Diposting oleh Unknown di 08.13 Tidak ada komentar: 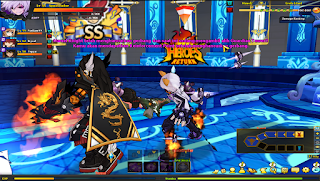 Those four skills I take is must-have skills, in PvE at least.
For me, Force Nova is better than Force Finger for PvE.
Diposting oleh Unknown di 17.27 Tidak ada komentar: 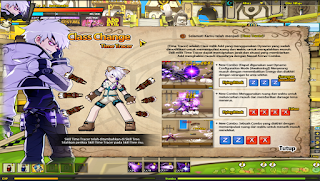 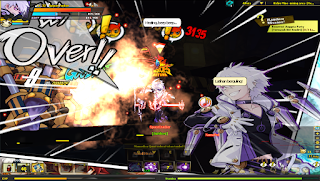 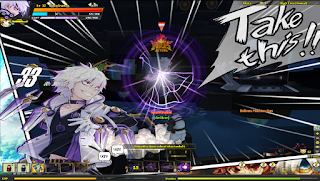 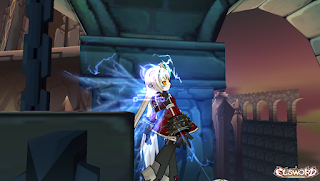 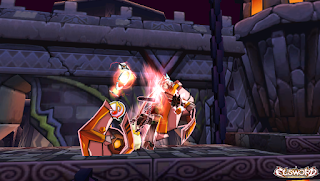 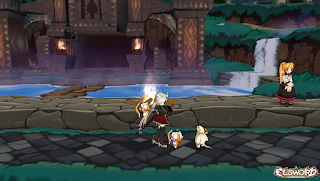 (image source)
Waiting for her release.. 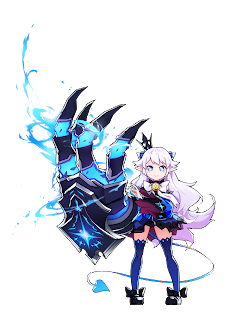 So here are some guides.
Note: If you new on RF, I recommended you to take a look information about Reckless Fist in Elwiki (of course Over Taker too), before read this.

Each players have their own playstyle. Reckless Fist is the only Raven's 2nd job with melee attack only. So, RF isn't recommended for people with range attack playstyle. From what I know, RF is better on offense than defense. So you need a good defensive play. Then, let's talk about those..
There are only a few RF skills with mid-range attack. His combo and the other skills is melee. But this is his strong point. For example, Archenemy with it's skill note can deal a good damage and reset Knockdown Counter (not fully reset after PvP S3). And then, we have Ground Impact also, with it's large 360 degrees hitbox. Not only good for mid-combo use but it works well for catch, it can hit opponent on low-height platform. GI is fine also in the mid-air by use it off ledges.
His combo is also good for catching, >>^ZZX and >>^X are usually I use. These combo are usual combo used for all RF players, especially for catch. And we have XX>X X~X which has super armor (after 2nd attack). But slow so that it is not really recommended for catch, still good for mid-combo and cancel it with skill before the last attack.
Like i said before, RF is better on offense than defense. That opinion is based how is skills worked out. His main defensive skills are Shadow Step and Burning Rush that all Raven can take those skills. Ground Impact and Limit Crusher are offensive skills, but it will work better with nice defensive playsytle. I mean.. attack and defense at the same time. Thanks to Ground Impact's large hitbox and Limit Crasher's super armor.
Talking about offensive and defensive playstyle, there are 2 umm.. maybe 3 predictions must be remembered:
First, predict the best way to defeat your opponent and the risk of it.
Second, predict what will your opponent do next.
The last and the weird one, predict what they predict (lol).
Those way of prediction isn't important, forget it. Well, I talked about defensive playsytle a lot. I just wanted to say that you need thinking about it, because it seems RF lacks about it.
And.. Don't force yourself to play RF if your playstyle isn't suit to play him. But.. If you want to try something different (just like I tried MM that good on range attack than melee), I willn't stop you. Maybe RF will become your favorite later, like am (lol and lol).
Oh yeah.. I forgot to write this, RF isn't really bad for supporting in team matches. However, melee character must be damage dealer in PvP.

After you decide to continue play RF, you must level up him (lol). I mean PvPing with low-level character, you can't fully enjoyed RF. I recommended to reach Lv. 60 (for any character and jobs you play), although after Lv. 80 cap updated it willn't runs well (looks like). It depends on how good your play (All hail pro)

Before making a good combination of stat and skill builds, first you must knew your playstyle. It must suit to you or everything willn't to be any good.
The most important stats are speed stats. You must have a minimal 20% (or 2000 based lv. 61) speed stats. Higher speed stats are better. The second is accuracy. But it is rare to see player with high evasion, so minimal 10% accuracy (usually recommended to have 20%, but it's not really important i think).
The third stats are for offense and defense. For offense, you must choose between: Critical or Additional Damage. In my point of view, Additional damage is better, for PvP at least. Critical works well with high damage weapon only. So i think, go with Additional damage is better. And add damage is really recommended if you think your character lacks of damage. Combination of critical and add damage isn't bad, actually. After the latest Secret dungeon revamp, all sdg magic stone will give extra point of critical. So want to max out critical or mix it up with additional damage, it's up to you.
For defense, we have: Reduction damage, Evasion, and HP too actually. Reduction damage is usually choosen stat for defense. Evasion isn't a lot different with critical, it is all about "chance." Much of peoples abandon Evasion and HP because it's better to use the sockets for other. And HP stat is limited also. I'm really recommended you to have a good reduction damage stat. Red damage is good in all condition. I don't like Evasion beacuse you willn't rely anything to "chance."
And the left are Awakening charge and time stats. These stats are only extra stats. I mean.. You don't need to have it, but it will be better if you have. RF's passive, Spiritualised Fury, gives a bit awakening charge and increase magic damage. For stats build, I suggest minimal 20% speed stats and use the left sockets for Additional and Reduction damage. It seems I write a lot about stats, then skill build now..

I have write some explanation about RF PvP skill, you can check it (here). I will write some important things here.
Shadow Step, Weapon/Armor Crash, and Limit Crusher are must-have skills. When nasod core protects you, escape with shadow step. And with Shadow Piercing passive, you can use it for catch and mid-combo too. Which better between Weapon and Armor Crash is depend to the player. In team matches, they are really suggested to have. I'm just use Weapon Crash for mid-combo, actually. Limit Crusher is the strongest active for RF, the skill itself has 50% chance for critical and stun with extra super armor status. Never use it after any Z attack or your opponent will escape. Other recommended skills are Burning Rush and Ground Impact. Burning rush works as utility skill (I don't need to explain about GI again).
For 100 MP skill, there are Charged Bolt - Hedgehog/Bloody Thrones and X Crash. List of combinations:
a. X Crash + Wild Charge (sometime with Charged Bolt too), usually used for team match PvPer.
b. Charged Bolt + Archenemy (no Wild Charge), for 1vs1 PvP.
c. Charged Bolt + X Crash (usually without Wild Charge), good both 1vs1 and team matches.
These three are usual combination for special actives. Mine is b. It's up to you which better between CB-BT and CB-H. But, I like CB-H one. Wild Charge is recommended for team match. Hyper Active is player's preference. HA willn't going to be good for 1vs1, I have it in my build but almost never use it (sometime replace it with Hell Dive).
I wrote a lot in this chapter, so let's move to the next chapter..

When you think you're really bad on play Reckless Fist, don't give up. After RF revamp, I felt my playing became worst and I think I would leave RF. But I kept learn and practice, and honestly my playing is a lot better than before (although my BM playing a little worst). If you is kind of player that care about ranks, you can do practice on sparring room.

I have two bonus chapter for you..

Choose which element that you like. Burning, burn up their HP. Freezing, punish them by reducing their defense and prevent them escaping by lowered their movement speed. Poison, reduce their attack speed and damage over time (weaker than Burning). Petrifying, turned your opponent into stone so that they can do nothing. Piercing, chance for your attack to pierce their armor (:v) and increase the damage at the same time, so you can deal higher damage. Plagued, steal their HP and MP.
Burning and Freezing are painful. Piercing is demn sick. Poison and Plagued are annoying. Petrifying? LOL and just LOL, but it might be dangerous sometime. Am recommended Freezing.
For element resist, here are my suggestion based from highest to the lowest priority: Water>Dark>Wind>Fire>Nature, abandon Light (lol).

Once you reached SS Rank, you probly will need to change your Sparring sets, like am do. MK-3 isn't really good because mostly after awakening you will attack instead let 'em attack you. Dragonic works well if you have high critical stat. Alterasia is better if your weapon element is Piercing or Plagued. Alchemist can recover 10% HP, it didn't recover much HP but it is useful in PvP. Guardian gives 50 MP when awakening, the good side of this set is chance for reducing damage, much more than old Hamel's Space Ruler (Lv.60) of mine. Except secret dungeon equipment sets, there are Mysterious Aspiration and Transcender of Henir sets. Since I haven't use any of them, so I can't give a clear opinion about it.
However, I think Glitter Alchemist is fine. It must be good if you can recover some HP in PvP, just like those WS do. :3 This will be better if you have a little awakening charge stats (1vs1, don't need it in team match). I have about 10%+ awakening charge and thanks to my guild's wrath passive, but I haven't done my set yet (just weapon :v).

I hope these guides are useful.

Have a nice day,

RF vs. RF in PvP Arena

Wih my waifu.. Back to my weaboo laifu.. 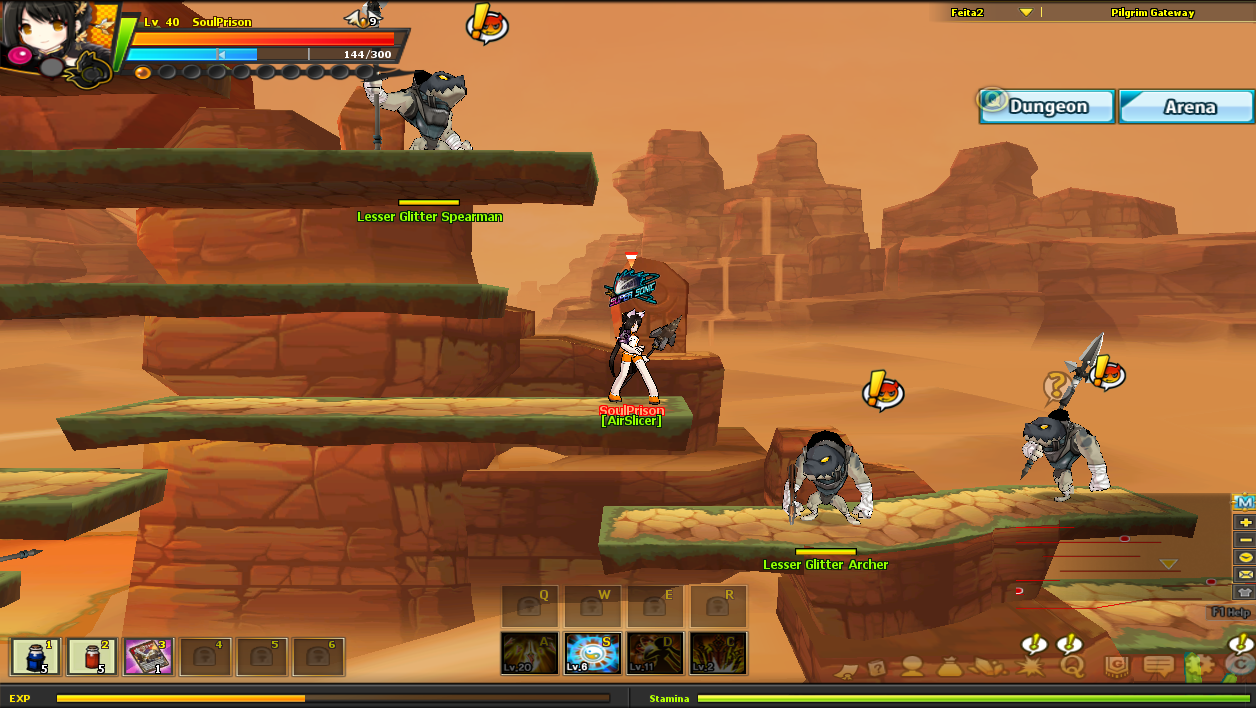